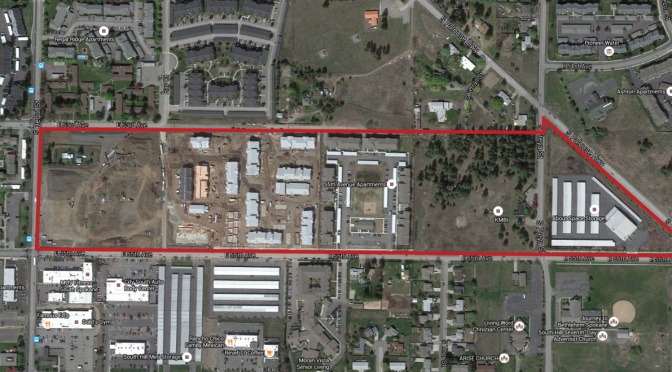 Last night our City Council held the first of two hearings on the proposed Spokane Housing Ventures Annexation. We’ve already written about it a number of times, we’ve discussed the annexation overall and the plans to build a retail center on the former South Regal Lumber Site.

Southgate Neighborhood Council and some neighbors provided written comments and testimony in support of the annexation, but with the condition that the retail and apartment portions be brought into the city as Center and Corridor zones that better meet the current land use designations out in the County and will help implement the City Comprehensive Plan and Southgate Neighborhood Connectivity Plan.

You can watch the hearing as broadcast on City Channel 5 on Vimeo (the annexation hearing starts at about an hour and 8 minutes): https://vimeo.com/154777568

The Council decided not to vote on the land use designations, but rather opted to leave the record open for the next 30 days so citizens can submit more written comments. On Monday, March 14th, the Council will hold a second hearing on the annexation and vote on both the land use and the overall annexation on that day.

I want to thank everyone that submitted comments prior to this hearing, the Council said they had a large number of comments from all over the South Hill and beyond which is why they decided to defer their vote and keep the record open to hear even more feedback. So please, keep talking to your neighbors and encourage them to send comments in to the City Council. You can find all of their email addresses here.

We will keep you aware of any new developments over the next 30 days, I hope we will see even more neighbors down at City Hall on March 14th to tell the Council what they think about this topic.