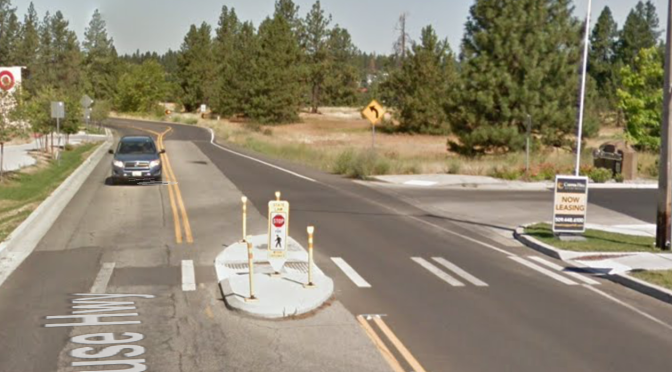 Every year, the City solicits applications from the neighborhood councils for its Traffic Calming Program. According to the City’s website traffic calming is, “a self-enforcing traffic management approach that forces motorists to alter their speed or direction of travel. The purpose of traffic calming is to improve safety, especially for pedestrians and bicyclists, and to improve the environment or “livability” of streets for residents and visitors.” The funding for this program comes from the City’s red light traffic cameras.

Southgate Neighborhood Council is allowed to submit two applications, one for a proposed arterial street and one for a residential street. Examples of past projects include the cross walk and refuge island on Palouse Highway behind Target and the addition of street tress along 42nd Avenue by Hazel’s Creek.

The 2018 applications are due on March 1st and so we will be discussing this topic at our neighborhood council meeting on Wednesday, February 7th. At our January meeting, attendees suggested a number of possible projects for consideration and we will be voting on these options next week. They are:

These are all arterial projects. Not every neighborhood application gets approved. Our applications two years ago were rejected.

The City has a website about the program and “toolbox” to provide some ideas for traffic calming solutions. Take a look and see if there are places in our neighborhood that could benefit from some traffic calming. Come to our meeting next week to discuss!

Here is a good example of what we are trying to avoid in terms of street design in the Southgate District Center. The Atlantic shared this a month or so ago and it is applicable to our neighborhood planning situation all over Spokane.

We want to avoid a stroad at all costs.  Spokane is rife with stroads, and Regal Street could join the list if we don’t get the city to enact the District Center code requirements and neighborhood plans. A stroad is a poorly designed street that neither accommodates auto traffic well, but also does not encourage multi-modal transportation or maximize the land use around it. 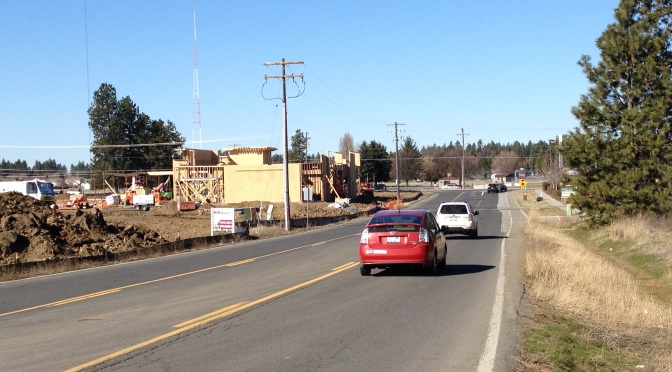 Welcome back! Now, for the second part of our Epic Planning Battles: Traffic Calming. Traffic calming is a set of road features used to create the environment that encourages pedestrian and bike uses in the District Center. Traffic calming, as envisioned by the City of Spokane, is a set of tools that can help implement our Centers and Corridors zoning and Complete Streets ordinance.

According to the City, traffic calming is, “a self-enforcing management approach that forces motorists to alter their speed or direction of travel. The purpose of traffic calming is to improve safety, especially for pedestrians and bicyclists, and to improve the environment or livability of streets for residents and visitors.” I want to emphasize that most traffic calming tactics are not meant to slow down traffic below posted limits and increase congestion, but rather encourage adherence to posted speeds and create conditions where other road users have safer access to our streets.

Given that our District Center is zoned CC1 (Pedestrian Emphasis/Auto Accommodating), traffic calming along Regal Street and Palouse Highway are a crucial part in changing the character of the area to meet the requirements of the zoning. Right now the roads through the Southgate District Center feature no bike accommodation and have pedestrian access that does not meet current city design standards; specifically a lack of any sidewalks along Palouse Highway and no pedestrian buffer strips on the sections of sidewalk we do have.

Speed limits through our District Center are currently posted at 30 -35 mph. According to the Spokane Comprehensive Plan, minor arterials in Focus Growth Areas should have a speed limit range of 20-30 mph.

In keeping with the precedent set in other CC1 zones, the speed limit through our District Center should be lowered to 20 mph to allow for safer bike and pedestrian use of our roads. I know people will deride this goal as only creating congestion on what they consider to be an already congested road, but looking at the amount of road effected and the reduction in speed we are talking about only 11 seconds of extra travel time along Regal through the District Center and 21 seconds along Palouse Hwy. Not a large amount of time by any standard, but a huge increase in livability and traffic calming for our pedestrian-oriented District Center.

Two big traffic calming features that create “frictional slowing” by creating the perception of a narrower road are on-street parking and planted medians. On-street parking has two benefits, it increases the amount of available parking in the District Center and the parked cars visually narrow the road (even though the lanes are the same standard width) encouraging motorists to slow down and be cautious. That’s a good thing in a pedestrian-oriented shopping district. Planted medians achieve the same effect by narrowing from the middle, increasing the perception of a narrow road and causing drivers to be more cautious and aware of their surroundings.

According to Spokane Municipal Code, on-street parking is a required feature in all Centers and Corridors. Both on-street parking and medians are key features in the street character designs in the District Center Integrated Site Plan and the Southgate Connectivity and Transportation Plan. We will not have the option of on-street parking in Southgate; the city has decided to not make our street designs align with Spokane Municipal Code and omitted on-street parking from the offsite improvements in our District Center. We are still not sure why or how this key feature was eliminated and it is part of an ongoing discussion with city planning staff. We are pursuing the inclusion of planted medias as mitigation for the lack of the required on-street parking, but have yet to reach an agreement with the city about its inclusion. They have agreed in theory to the inclusion of medias, but there is not yet agreement about how to pay for them or when they need to be built.

Ultimately, the goal is to change the character of the road to absorb the impact of increased traffic from the development of the District Center properties. As mentioned in our last post, adding a streetlight at Palouse and Regal will manage the flow of the new traffic, but it is these traffic calming and complete street elements that will provide options for people in our area to travel to the Southgate District Center in something other than a car that stand to have the most impact on increased demand.

Providing multi-modal facilities and a calm traffic environment will create a district that encourages people to get out of their cars. There will be plenty of parking (Target alone has 11 acres), but we want to make this a place you can park at and then travel around by foot, or get to without a car entirely.