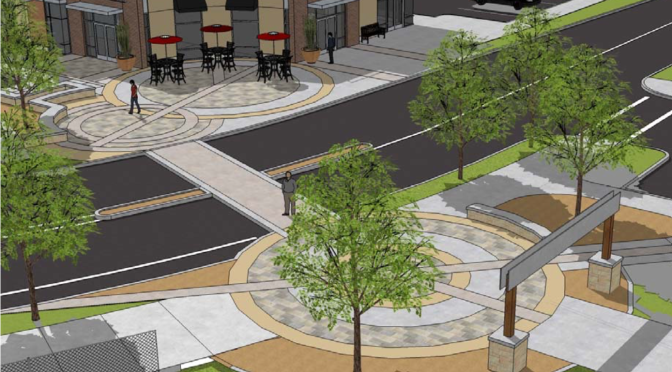 The KXLY Development in the Southgate District Center has two different review deadlines coming up this week.

On Wednesday, March 22nd the City’s Design Review Board will hold a “recommendation meeting” of the project at 5:30pm at City Hall where the developers will present their responses to the initial design review back in February. You can see the updated design here (warning: large 150MB file). The biggest changes are enhanced pedestrian connections between the development and the park, inclusion of infrastructure for STA’s new High Performance Transit stops along Regal, addition of a mid-block pedestrian crossing on Regal between the new development and the Target site, and better screening of the south side of the proposed grocery store. Feel free to take a look and send your comments in to Julie Neff at the City Planing Department.

On Thursday, March 23rd the agency comment period for the KXLY project SEPA Application closes. The SEPA Application is where we can comment on issues like traffic impacts and stormwater management. The SEPA Application references a Traffic Operation Study submitted to the City in December that covers trip generation and Level of Service (LOS) for roads around Southgate before and after the project. The traffic study says the project will add 12,625 ADT to Regal Street bringing the total trips on that section of Regal up to 28,525 ADT when added together with existing trips from the City of Spokane Traffic Volume Map. That total doesn’t include trips generated by the new Maverik gas station or the proposed Regal Commons project. The SEPA application also covers potential stormwater impacts, so you can review that information as well. You can submit your comments on this SEPA Application to John Halsey at the City of Spokane Planning Department.

Things are moving fast with the weather improving. Make yourself heard before it’s too late.