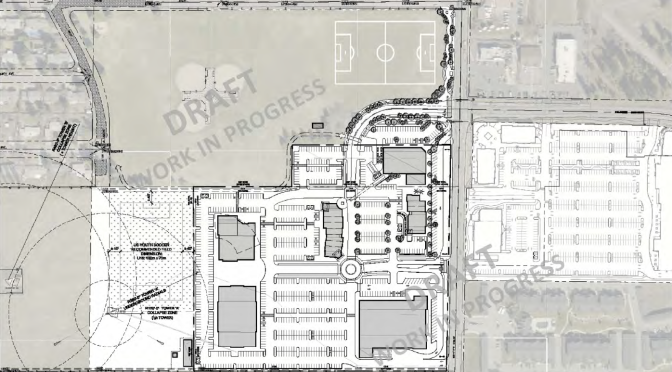 The public comment period for the KXLY Development SEPA Application ends tomorrow, June 19th, at 5:00pm. This comment period snuck up on us since there was no notification made directly to the neighborhood via mail or to the broader public via a posted sign on the property. There was apparently a notice placed in the Spokesman Review for those that read the public notice pages.

Regardless of the lack of notification, you still have a chance to have your opinions on this project heard. We have collected all the development materials on one page for your to review. SNC also submitted comments during the agency review period that you can review as well.

Some of the main topics of concern from our comments that remain to be fully answered is the true measure of traffic impacts from this development. Aside from specifically calling out the future grocery store, the developers use the more broad development category “Shopping Center” to measure their traffic impact, but we know that there are other high impact traffic generators included in the plan such as a drive-through restaurant. This would increase their traffic impact and as a result their mitigation fee to the City.

One other area of remaining concern are the developer’s plans to manage stormwater on their site. Preliminary plans show them retaining the water in a large pond under the radio tower to the west of the development. There have been concerns about groundwater saturation from neighbors upstream of the KXLY site who already experience high water tables and occasional flooding in their neighborhoods. How will the City and developer certify that paving 80% of the project site will still allow for proper infiltration and movement of storm water for these existing residents?

Whatever your views and concerns are, I encourage you to send an email to John Halsey, jhalsey@spokanecity.org, prior to the closing of the comment period tomorrow evening.

The KXLY Development in the Southgate District Center has two different review deadlines coming up this week.

On Wednesday, March 22nd the City’s Design Review Board will hold a “recommendation meeting” of the project at 5:30pm at City Hall where the developers will present their responses to the initial design review back in February. You can see the updated design here (warning: large 150MB file). The biggest changes are enhanced pedestrian connections between the development and the park, inclusion of infrastructure for STA’s new High Performance Transit stops along Regal, addition of a mid-block pedestrian crossing on Regal between the new development and the Target site, and better screening of the south side of the proposed grocery store. Feel free to take a look and send your comments in to Julie Neff at the City Planing Department.

On Thursday, March 23rd the agency comment period for the KXLY project SEPA Application closes. The SEPA Application is where we can comment on issues like traffic impacts and stormwater management. The SEPA Application references a Traffic Operation Study submitted to the City in December that covers trip generation and Level of Service (LOS) for roads around Southgate before and after the project. The traffic study says the project will add 12,625 ADT to Regal Street bringing the total trips on that section of Regal up to 28,525 ADT when added together with existing trips from the City of Spokane Traffic Volume Map. That total doesn’t include trips generated by the new Maverik gas station or the proposed Regal Commons project. The SEPA application also covers potential stormwater impacts, so you can review that information as well. You can submit your comments on this SEPA Application to John Halsey at the City of Spokane Planning Department.

Things are moving fast with the weather improving. Make yourself heard before it’s too late.

At our last Southgate Neighborhood Council meeting the developers of the KXLY property presented a concept site plan highlighting their project’s connection to the Southeast Sports Complex and its enactment of the intent of the Center and Corridor zoning and Integrated Site Plan.

We’ve uploaded the full presentation here for people to look and review. Keep in mind a couple things: 1)These are just draft concepts and there have been no building permits applied for at this time. 2) The developer has not mentioned or listed any tenants of the buildings at this time. So any mention of a company or store is just illustrative.

You can catch a news story about this on KXLY News tonight at 5pm and 6pm.

Lastly, please make sure to comment on the proposed Comprehensive Plan Amendment for the small city-owned parcel between the park and KXLY’s property. Comments are due July 11th and you can see more information about the proposal on the City’s Planning Department website. The comments period is just about the zoning change and purchase of the small city-owned parcel, not the development as a whole. The full development will get its own design review and comment period when the developers submit building permits. This proposal is the first domino that as to fall before any major development actions take place.